Summary of The Tragedy of the European Union 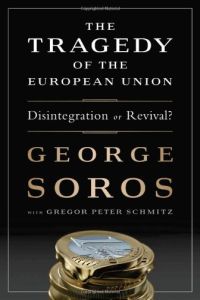 Ever since George Soros – a liberal hedge fund billionaire – famously sold the British pound short, even before 1992’s devaluation, he has commanded attention when he anticipates changes in monetary policies, currency markets, economic trends and politics. Soros discusses the European Union’s potentially uncertain future in this question-and-answer-format interview book. Soros calls the Maastricht Treaty, which established the euro, the “tragedy of Europe,” because it relegated “debtors to the status of Third World countries.” He calls for better leadership from Germany and sees Chancellor Angela Merkel as both a “disappointment” and a figure of hope for the future. A child survivor of the Nazi occupation of Hungary, Soros believes “normal rules” don’t apply in “exceptional times,” and that passive compliance is dangerous. Gregor Peter Schmitz, Der Spiegel’s European correspondent, interviewed Soros and elicited his candid views. Schmitz’s grasp of the euro crisis and his interviewing mastery shine through his introduction, commentary and compilation of Soros’s frank and frankly one-sided opinions. While always politically neutral, getAbstract suggests Soros’s intriguing insights into Europe’s economic and political challenges to interested onlookers of all persuasions.

George Soros is chairman of Soros Fund Management and founder of a network of foundations that supports open societies. Gregor Peter Schmitz is the Europe correspondent for Der Spiegel.

European countries would fare better if they redefined the rules of the Maastricht Treaty, which created the euro. Instead of uniting the European Union, as intended, the euro has deepened its divisions. Compliance with Maastricht is the “tragedy of Europe” because it makes increased integration of the EU more difficult.

Indebted EU nations bear increased bond default risk because their debts are denominated in the euro, a currency they can’t control, rather than in their native currencies. The euro sustains “an uneven playing field” that has relegated deeply indebted EU nations “to the status of Third World countries.”

Maastricht prohibits the financial rescue, or bailout, of any troubled EU country. The treaty’s basic error is to assume that government borrowing is the sole cause of recurring fiscal deficits and destabilization of the currency. Maastricht is a creation of the central bank of Germany, the Bundesbank. A “flawed set of rules” governs the EU with the weight of treaty law, and member countries are reluctant to revise it.

Introducing the euro was supposed to create a “well-functioning European Union.” Instead, the euro...