Summary of The Transformer 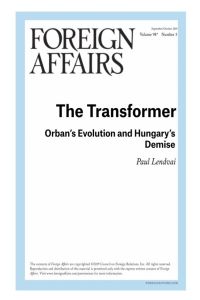 Hungary’s strongman Viktor Orban is known for his fiery populism and ruthless crackdowns on the nation’s judiciary, independent media and intellectuals. Yet 30 years ago, no one could have foreseen that a man who started his political career as a champion of democracy and liberal reforms would be touted as a dangerous authoritarian. Orban’s biographer Paul Lendvai details this political metamorphosis in a Foreign Affairs essay that will be of interest to anyone trying to make sense of the rise of right-wing populism in Europe.

Paul Lendvai is a Hungarian-born journalist and the author of Orban: Hungary’s New Strongman.

Hungarian Prime Minister Viktor Orban made his political debut as an anti-communist activist in the liberal youth movement.

Born in 1963, Viktor Orban grew up in poverty in Soviet-dominated, communist Hungary. As a law student in Budapest, he joined a group of young liberals and started working for philanthropist George Soros’s organization. The organization, which later became the Open Society Foundations, granted him a scholarship to study European political philosophy at Oxford University.

Orban became a founding member of the Alliance of Young Democrats, or Fidesz, and was catapulted to national attention in 1989 when he gave a passionate, nationally televised speech at one of Budapest’s most memorable anti-communist rallies. In 1993, Orban became president of Fidesz and a forceful advocate for liberal reforms.

To boost his and his party’s political fortunes, Orban moved to the political...

A Foreign Policy for the Post-Pandemic World
8
Orbán
7
Counter-Revolution
8
Why We Elect Narcissists and Sociopaths
7
The Age of Walls
8
The People vs. Democracy
9