Summary of The Trouble with Europe 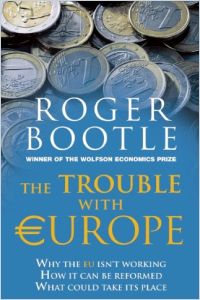 Even before the Brexit vote, commentators wondered whether the European Union would last and whether it was a good idea in the first place. Economist Roger Bootle offers compelling arguments as to why both answers should be no. The power of his narrative derives from the presentation of his thesis – he offers a bitter pill but in a form that readers can swallow. He avoids jargon and brings clarity to complex economics. Some crucial events – most notably the UK’s June 2016 vote to leave the EU – have come to pass since Bootle wrote this analysis. While always politically neutral, getAbstract finds that this overview remains interesting for students, educators, entrepreneurs, policy makers and business leaders who seek answers about Europe’s uncertain economic future.

Economists Roger Bootle is the author of The Death of Inflation, Money for Nothing and The Trouble with Markets. He founded and heads Capital Economics, a research firm.

The History of the European Union

In 2014, the European single market was the world’s largest trading bloc, with a combined GDP of about €12 trillion [$13.5 trillion]. But to understand the European Union today, look first to the past: consider the aftermath of World War II, when Europe sought to prevent another war. The region’s elites believed integration could calm historical rivalries and nationalist passions. Frenchmen Robert Schuman and Jean Monnet promoted this vision in the European Economic Community, the EU’s precursor.

A series of treaties shifted power from nation states to union institutions. In 1992, the Maastricht Treaty laid the foundations for the euro currency and the political ties that monetary union brings. The EU’s economic growth has accompanied a massive increase in the number of countries in the Union: It began in 1957 with six members and today has 28. A united Europe grants its countries the necessary scale to compete with the United States, China and India, and a large, peaceful marketplace serves individual nations’ financial interests.

History has fueled many of Europe’s current problems, such as the British...

The Germany Shock
7
For the euro there is no shortcut to becoming a dominant currency
7
EU Debt as Insurance Against Catastrophic Events in the Euro Area
8
Brexit: What’s Next?
8
The European Green Deal
8
An Effective Economic Response to the Coronavirus in Europe
7