Summary of The Trouble with Markets 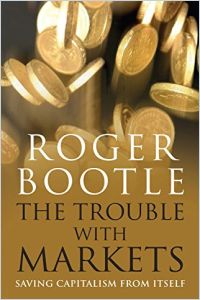 You could call Roger Bootle a self-hating economist. In this trenchant study, he takes ruthless aim at fellow economists and financial professionals for allowing the financial markets to run amok. Despite his status as a City of London insider, Bootle mauls bankers for collecting overly rich paychecks and bashes investment advisers for their general cluelessness. While Bootle isn’t the only observer to arrive at the conclusion that the markets are broken and that free-market ideology is wrong, his sophisticated understanding of finance makes his arguments especially astute. getAbstract recommends this intriguing book to investors and policy makers seeking a thoughtful prescription for Wall Street and the City.

Roger Bootle is one of the City of London’s top economists. His other books include The Death of Inflation and Money for Nothing.

Financial markets have much to recommend them. Free markets have spread prosperity across the developed world. Yet free markets also are prone to excess. In boom times, the markets’ worship of profit at any cost distorts business relationships. The misguided belief that markets offer a model for society at large has affected social policy.

During the boom, people came to accept that markets mitigated risk and created stability. Conventional wisdom held that society should exalt the markets, while governments should simply get out of the way. The “Great Implosion” of 2007-2009 proved the ridiculousness of that belief. Financial engineering made mortgages too readily available and caused housing prices to soar. When the bubble burst, the effects were surreal. Subprime mortgages backed by assets like the putative value of mobile homes in Arkansas felled seemingly safe institutions like Germany’s Landesbanks. But subprime loans were only part of the problem; Lehman Brothers collapsed because it took on too much risk and lacked liquidity, among other factors. Worldwide, unchecked risk ran rampant. Any pretensions by regulators...