Summary of The Trusted Executive 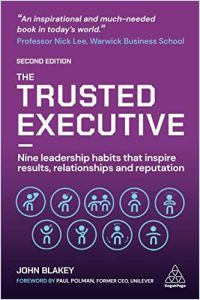 People demand more from leaders today than a commitment to profit. They want to trust the people in charge. Such trust is a valuable – but easily destroyed – commodity. Executive coach John Blakey argues that to earn trust, leaders must be conscientious global citizens committed to empowering stakeholders who traditionally lack boardroom influence. Now, the leadership challenge is to build a high-trust culture, earn a reputation as a trustworthy leader and recover from trust-eroding mistakes. Leaders must value trust, Blakey argues, because it’s the hidden driver of high performance.

Putting profit before trust is obsolete. Embrace transparency instead.

People don’t trust organizations unless they trust the people at the top of their hierarchies. The behavior of your CEO and leadership team determines whether a high-trust culture will thrive at your company. Unlike leaders from older generations who traditionally embraced a more profit-driven approach, young people demand transparency, which tech-driven organizations require in order to function.

When the PR firm Edelman surveyed investors, it discovered that 84% of respondents felt the primary goal of a business shouldn’t be only shareholder value maximization, but that companies should consider the needs of its stakeholders and local communities.

Management Mess to Leadership Success
7
How Not to Manage People
8
Lead. Care. Win.
9
Strategic Doing
9
The Power of Virtual Distance
8
The Burnout Fix
9