Review of The Undoing Project 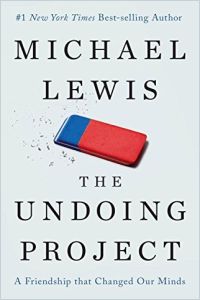 Michael Lewis – the best-selling author of Liar’s Poker, Moneyball and The Big Short, among others – presents a fascinating overview of the lifelong friendship between, he argues, two of the world’s smartest men: psychologists Daniel Kahneman and Amos Tversky. By focusing on their friendship, Lewis can detail Jewish refugees’ escape from Europe during World War II, the growth of Israel and significant trends in psychology. Lewis’s writing comes alive when he’s describing the ideas these two men produced and how they shaped entirely new ways of thinking about human thought and decision making.

“Confirmation bias” occurs when the mind embraces only information that it expects and rejects information it doesn’t expect.

Lewis offers a telling example of confirmation bias to bring you into his story. Daryl Morey, the general manager of the Houston Rockets basketball team, worked on creating a statistical model by which he could judge basketball players’ abilities. Morey recognized that when observers notice that a player has one outstanding characteristic, they usually build their entire impression around that characteristic and make their data conform around it, too. This is confirmation bias and, in its grip, Lewis explains, your mind rejects what it doesn’t expect to see and enthusiastically embraces what it does expect to see. Most people aren’t aware when they succumb to confirmation bias, because you innately always expect to have your prejudices confirmed. And because you do, they are.

Lewis introduces Kahneman as a student of psychology and the son of European Jewish refugees who settled in Israel before it was a state. Kahneman found Gestalt therapy compelling, in that its practitioners seek to understand how the brain creates meaning. The senses collect data from the world, but, Kahneman asked, how does the brain collate and ascribe meaning to all this sensory data?