Review of The Ungrateful Refugee 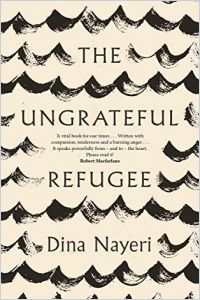 Novelist Dina Nayeri’s urgent, provocative stories recount her flight from Iran, her need to assimilate in the United States, and her frustration at the injustices and indignities refugees face. Volunteering at refugee camps in Greece and assisting asylum seekers in Europe, Nayeri encountered tragedy, sorrow, hopelessness, anger and apathy, but also courage, love and determination. Her memorable, fearless stories call for compassion and justice for the most vulnerable people in the world.

Dina Nayeri won the UNESCO City of Literature Paul Engle Prize and a National Endowment for the Arts literature grant. Her novels Refuge and A Teaspoon of Earth and Sea have been translated into several languages.

Novelist Dina Nayeri, author of Refuge and A Teaspoon of Earth and Sea was born in 1979, the year Iran fought a revolution that would turn it into an Islamic state. Nayeri writes that people in her hometown, Isfahan, respected her parents. Her mother was a doctor, and her father was a dentist. But, Nayeri explains, her mother converted to Christianity in 1985, and then experienced three years of harassment and threats for her apostasy. At Nayeri’s school, teachers and fellow students reviled her for not being Muslim. Facing imminent arrest for declining to spy on her fellow Christians, Nayeri’s mother decided to flee Iran, taking her children and leaving her husband behind. On the drive to a flight to Dubai, Nayeri reports, she vowed that if her family made it to the United States, she would work hard, learn English and become exceptional.

Nayeri describes their incredible saga of escape: her father had a friend who smuggled them out on a cargo plane. They had no passports to leave the country, but her father had a patient who worked in the passport office and who desperately needed a root canal. One of her father’s relatives agreed to sponsor his wife and children for tourist visas in Dubai. From there, they could apply for asylum in Europe or the Americas. Her mother dubbed this series of events “The Three Miracles,” and, Nayeri notes, they became family mythology.