Summary of The Unnatural World

Scribner, 2016
From THE UNNATURAL WORLD: The Race to Remake Civilization in Earth's Newest Age by David Biello. Copyright © 2016 by David Biello. Reprinted by permission of Scribner, a Division of Simon & Schuster, Inc.
ISBN: 9781476743905
Pages: 304 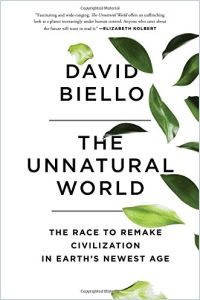 Numerous books discuss climate change, but in this intelligent, fascinating and terrifying new analysis, David Biello, contributing editor for Scientific American and TED’s science curator, examines what it means to live in a world that human forces have transformed. He explores how people are trying to coexist with an environment they have permanently, fundamentally changed. Biello examines the ways humans generate energy, pollute the environment, change the climate, and attempt to deal with changes beyond their understanding and, possibly, beyond redemption. He vividly describes attempts to geoengineer Earth, even as people fail to understand the damage their actions have done to the planet. getAbstract recommends this groundbreaking overview to those interested in climate change, the future or how massive change affects society. Read it to prepare for life on a planet humans have irrevocably transformed.

When astronauts first saw the Earth from space, it changed how they thought of the planet. The photograph of this view helped fuel the emerging “environmental movement.” This shift in perspective brought forward a new idea: Instead of being subject to natural forces, humanity is now a “world-changing force of nature.”

Humanity is the first species to change its environment with conscious awareness. People can choose how they act. Now, they must decide how to deal responsibly with the massive changes they created. The path forward isn’t clear, and the stakes are incredibly high.

Living in a Human World

The carbon dioxide humanity releases into the atmosphere will affect Earth for centuries. As people adapt to the changes they created and conserve existing ecosystems, they must determine what they are dealing with in the present moment. Conservationists used “styrofoam airplanes” to take diagnostic pictures of forests, then kites and now drones. They also use satellite images and software to monitor forest growth, clearing and fires. The resulting images conceptually...

Adapt Now: A Global Call for Leadership on Climate Resilience
8