Summary of The Up Side of Down 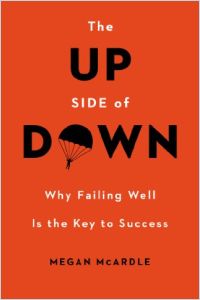 Business journalist Megan McArdle begins with a fundamental and insightful question: Given that failure is an inevitable part of life, what is the most productive way of thinking about it? Failures do not always happen because someone did something wrong. Sometimes, failures are the consequence of taking a big, creative risk. McArdle offers a wide-ranging tour through different types of failure and explains how best to respond to each kind. She touches on the demise of the old General Motors, the 2008 financial crisis, welfare reform, unemployment, the breakup of personal relationships, and much else in between. She’s at her best when she sticks with her overriding theme and most compelling claim – that the way people respond to failure is crucial to building the mind-set that promotes productive innovation. getAbstract recommends McArdle’s insights and examples to entrepreneurs, business owners and anyone promoting economic policies that foster innovation.

Megan McArdle, a columnist for Bloomberg View, is a former staff member at The Economist and The Atlantic.

Failure is inevitable – so you’re better off going through it early and often and taking it as a learning opportunity. Failure is central to the learning process. Students fail tests, flashy new products fail, once-dominant businesses implode, doctors and nurses make fatal errors, and marriages disintegrate. To learn to fail well is to learn from your mistakes – ideally, so you see how to correct them and avoid repeating them, but also so you can cut your losses and move on.

Early this century, Peter Skillman, then the head of user experience for Palm, undertook an experiment in which he asked a diverse group of people to use spaghetti, tape and string to design the tallest possible structure that would support a marshmallow. The winners weren’t MBAs, lawyers or even Taiwanese engineers; they were a chaotic group of kindergarten students. The little kids experimented freely, thrust failures aside and instinctively learned from their mistakes.

Jeff Stibel, CEO of Dun & Bradstreet Credibility Corp, thinks something similar is true of business. He finds that failing and having your back against the wall are the only ways you learn what...

How the US Workforce Is Changing
8

Corporate Crime and Punishment
9
What Did We Know? What Did We Do?
8
The Apology Impulse
8
Undisruptable
7
Why Wall Street Matters
7
The Creative Thinking Handbook
9