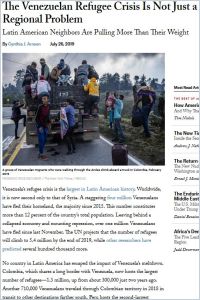 Around 5.4 million refugees are projected to have fled Venezuela by the end of 2019 – yet the international response to address the crisis has so far been weak. Cynthia J. Arnson, the Director of the Woodrow Wilson Center’s Latin American Program, makes a passionate plea for addressing the crisis, noting that the growing humanitarian crisis is taking a toll on Venezuela’s neighbors that the international community will soon no longer be able to ignore. Her entreaty is essential reading for all with an interest in the region.

Cynthia J. Arnson is Director of the Latin American Program at the Woodrow Wilson Center.

As of July 2019, around four million Venezuelans – representing 12 percent of Venezuela’s population – have fled economic collapse and political repression in their home country. By the end of 2019, the number of Venezuelan refugees will likely climb to over 5.4 million.

Neighboring Colombia has so far borne the brunt of the exodus, receiving 1.3 million refugees and allowing an additional 710,000 to travel through its territory. Peru has taken in over 800,000 so far. Recipient countries are increasingly struggling to provide food and shelter, as well as medical assistance and employment, to the mounting numbers of incoming refugees.

A Path to War With Iran
7
America’s Democratic Unraveling
8
How Liberalism Became ‘The God That Failed’ in Eastern Europe
5
The Transformer
8
There Will Be a One-State Solution
8
Global Risks 2035 Update: Decline or New Renaissance?
8