Summary of The Vigilante President 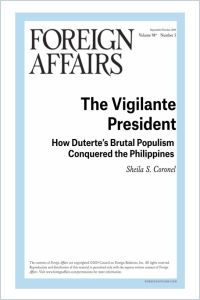 Philippine president Rodrigo Duterte’s enduring popularity is baffling. Despite notorious headlines about government-sanctioned extrajudicial killings and crackdowns on the independent media, his approval ratings continue to hover at around 80%. Sheila Coronel provides a colorful narrative of Duterte’s political coming-of-age and explains the reasons for his continuing appeal among a broad section of the Philippine population. Her essay is an essential background read for anyone grappling with the growing appeal of illiberal strongmen around the world.

An often-recounted anecdote of Rodrigo Duterte shooting a classmate encapsulates some of the Philippine strongman’s character traits that have helped him rise to power.

Rodrigo Duterte grew up on the Philippine island of Mindanao, where his father was the provincial governor. Although Duterte was part of the Philippine political elite, his southern-Philippine origins made him come across as provincial among his Manila law school classmates. At political rallies, he often retells the story of him shooting a classmate who made fun of his southern accent – both to “teach him a lesson” and save his honor. The image of him that the story projects – an underdog who earns the respect of others by taking the law into his own hands – remains appealing among a broad section of the Philippine population.

Duterte has successfully exploited the middle class’ grievances against “imperial Manila” and national and international elites in general. Moreover, he has addressed people’s frustration with lawlessness in the country by ruthlessly taking on drug offenders and petty criminals. With an approval...

What You Should Know About Politics . . . But Don’t, Fourth Edition
7

The Age of Zombie Democracies
7