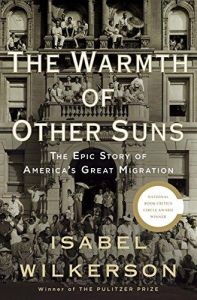 The Warmth of Other Suns

The review below was first published in the getAbstract Journal on Feb 2, 2021.
We’ve reviewed this title for you as we currently cannot offer a summary.

Journalist Isabel Wilkerson, the author of Caste, won the 1994 Pulitzer Prize as Chicago bureau chief of The New York Times. With her usual rigor and style, Wilkerson creates an instant classic with this saga of the Great Migration, the mass movement of Black Americans from the South to the industrial north and west. She exemplifies a half-century of sociological upheaval through the experiences of a Mississippi sharecropper, a Florida orange picker and a Louisiana doctor. Writing with verve and eloquence, Wilkerson presents the Great Migration as the most significant untold aspect of United States’ history.

Wilkerson’s reporting garnered the Heartland Award and the Mark Lynton History Prize. Suns earned mentions on top ten or best book of the year lists of The New Yorker, The Washington Post, The Economist, The New York Times, Entertainment Weekly, Amazon, O: The Oprah Magazine, USA Today and many others. The Washington Post called it an “extraordinary and evocative work,” and The New York Times Book Review said, “A narrative epic rigorous enough to impress all but the crankiest of scholars, yet so immensely readable as to land the author a future place on Oprah’s couch.” Recommended companion readings include Wilkerson’s Caste and Barack Obama’s A Promised Land.