Summary of The Winning Manager's Playbook 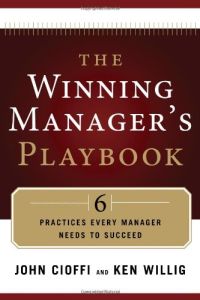 Navigating a business requires not only doing “things right” but also doing the “right things,” which, in essence, means being both a good manager and a competent leader. If the weight of that responsibility panics you, pick up this book by management consultants John Cioffi and Ken Willig. They narrate a valuable crash course on management, peppering their lessons with the adventures of “Mike,” a fictional manager, and with numerous anonymous “true stories,” which the authors amassed from their experiences in the field. getAbstract finds that this savvy guide provides a basic, pragmatic road map for managers, especially novices.

As a manager, you must “do the right things (good leadership), as well as do things right (good management).” To accomplish these goals and to create a workplace environment that’s ready for success, develop “the Six Habits of Highly Successful Managers,” and incorporate them into your daily activities. This requires “discipline and commitment.” You may need to change the way you act, including getting rid of some bad habits and replacing them with new ones.

Royal Robbins is a famous rock-wall climber. He was the first person to complete a solo ascent of El Capitan, Yosemite National Park’s imposing 3,000-foot-high monolith. At one point during his climb, Robbins had to stop because scaling the rock face had become too difficult; the handholds and footholds were too small, the overhangs too daunting. By this point, Robbins had clambered higher up El Capitan than any other solo climber. He could have felt proud of his accomplishment, descended and planned to conquer the rock face another day. But Robbins did not want to quit. Instead, he changed his goal. His new plan became not to scale El Capitan – ...