Summary of This Idea Is Brilliant

Harper Perennial, 2018
THIS IDEA IS BRILLIANT: Lost, Overlooked, and Underappreciated Scientific Concepts Everyone Should Know. Copyright © 2018 by Edge Foundation, Inc. Published by arrangement with Harper Perennial, an imprint of HarperCollins Publishers
ISBN: 9780062698216
Pages: 544 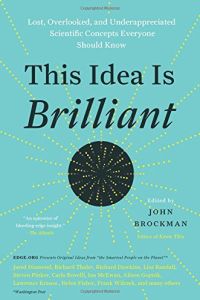 Editor John Brockman’s anthology of science’s most under-appreciated ideas is packed with 205 scientific ideas curated by cutting-edge thinkers and scientists. By necessity, the descriptions are short, but each one will spark your imagination and make you think. This is a treat for science buffs and science fiction aficionados alike.

Editor John Brockman is the publisher of Edge.org, an online science website, and CEO of Brockman Inc., a New York City literary agency.

Cambridge professor William Whewell coined the term “scientist” in 1833. Before the modern era, “natural philosophers” pursued science to glean the “mind of the Creator” in the world. Formalizing scientific study took it out of the realm of thought and into the arena of experimentation.

The foundation of science is the “scientific method:” first comes a hypothesis, then an experiment, and then a result that confirms or contradicts the hypothesis. Humans are imperfect and have biases, sometimes unconscious. Sometimes money warps a science organization’s goal; the Tobacco Industry Research Committee actively worked for 40 years to stifle the truth about the harmful effect of tobacco use.

Here Come the Waves
9
On the Future
8
Novacene
8
Why Do We Need to Sleep?
8
The Unnatural World
9
Symphony in C
9