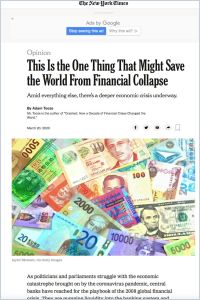 The coronavirus pandemic is affecting the financial system, and politicians and central banks are responding with some of the same strategies deployed during the 2008 crisis. But this time the problem is entirely global, and the world is financially and geopolitically different from what it was in 2008. Professor Adam Tooze looks at what’s changed and what that might mean for the institutions charged with securing the global financial system during an unprecedented crisis.

Adam Tooze is a historian and a professor at Columbia University. He is the author of the award-winning book Crashed: How a Decade of Financial Crises Changed the World.

Political establishments and central bankers are trying to figure out how to handle the liquidity issues brought on by the coronavirus pandemic. This is the second time in the 21st century that a lack of US dollar funding has arisen, a major problem since much of the world’s economic activity relies on the American currency.

In response to the 2008 crisis, the Federal Reserve injected huge amounts of money into the financial system. But unlike then, when banks in the United States and Europe were at the center of the crisis, the financial effects...

The Sovereign Fed
8
What is the repo market, and why does it matter?
8
The Financial Crisis and the Free Market Cure
7
The Repo Market, Explained
9
Firefighting
8
The American Economy
7