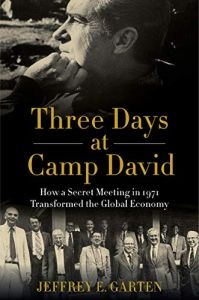 How a Secret Meeting in 1971 Transformed the Global Economy

The review below was first published in the getAbstract Journal on Feb 24, 2022.
We’ve reviewed this title for you as we currently cannot offer a summary.

Jeffrey E. Garten, former senior adviser to the Nixon, Carter and Clinton administrations, reveals how President Richard Nixon’s decision – made over one tumultuous weekend in 1971 – to end the Bretton Woods fixed-currency system turned out to be a pivotal moment in history.

The postwar monetary arrangement contained the seeds of its own demise. Jeffrey E. Garten

Garten – who is also a prolific author, dean emeritus of the Yale School of Management, and a former managing director at the Blackstone Group and at Lehman Brothers – provides authoritative and nearly novelistic detail about the personalities involved in the clandestine meetings and their motives, which proved both economic and profoundly political. Garten explains why breaking with the gold standard marked a crucial point in US history: It signaled the beginning of the end of America’s role as leader of the free world.