Summary of Throwing Rocks at the Google Bus

Portfolio, 2016
© 2016
From THROWING ROCKS AT THE GOOGLE BUS by Douglas Rushkoff. Summarized by arrangement with Portfolio, an imprint of Penguin Publishing Group, a division of Penguin Random House LLC
ISBN: 9781617230172
Pages: 288 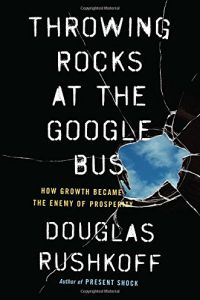 Douglas Rushkoff, author of the best-selling Present Shock, passionately outlines how the digital marketplace has gone wrong. He sees an economy clouded by soaring rents in Silicon Valley and an ever-greater concentration of wealth on Wall Street. He’s troubled that companies such as Facebook and Google must pursue a strategy of growth at all costs, and he cites the consequences in human and business terms while offering possible solutions. Rushkoff’s progressive prescriptions include, among other ideas, alternative currencies and a guaranteed minimum income. While always politically neutral, getAbstract recommends Rushkoff’s intriguing arguments to investors and policy makers seeking insight into the digital economy.

In December 2013, protesters in San Francisco targeted Google buses ferrying Google engineers from their homes to the company’s corporate campus in Mountain View, California. San Francisco’s soaring cost of living frazzles residents, and protestors saw the Google buses as an obvious symbol of high-wage workers moving into town and driving up rents and real estate prices. Landlords near the Google bus stops collected a 20% rent premium compared to other parts of San Francisco, where the cost of living was already stratospheric.

Google – which began in a garage, revolutionized the Internet and promised to do no evil – appears to be the ultimate Silicon Valley success story. But Google’s benefits, in the form of a rising stock price and hefty salaries for software engineers, accrue only to a fortunate few. Everyone else bears its costs, such as rising income inequality and a soaring cost of living. The Google buses [...