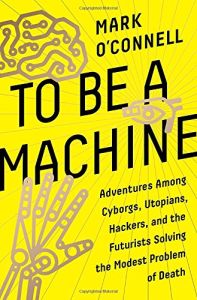 To Be a Machine

Adventures Among Cyborgs, Utopians, Hackers, and the Futurists Solving the Modest Problem of Death

The review below was first published in the getAbstract Journal on Jan 7, 2022.
We’ve reviewed this title for you as we currently cannot offer a summary.

O’Connell has fun with his discoveries and the language he uses to describe them. Appropriately, The New York Times Book Review – which named this an Editor’s Choice – said, “This gonzo-journalistic exploration of the Silicon Valley techno-utopians’ pursuit of escaping mortality is a breezy romp full of colorful characters.” Machine was a finalist for the Royal Society Investment Science Book Prize; shortlisted for the Baillie-Gifford Prize for Non-Fiction; and won the Wellcome Book Prize. NPR.org called it, “Wryly humorous, cogently insightful.”