Summary of Trade Is Not a Four-Letter Word 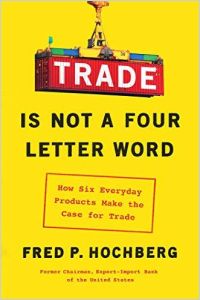 The review below was first published in the getAbstract Journal on Jan 7, 2021.
We’ve reviewed this title for you as we currently cannot offer a summary.

A Different Perspective on Global Trade

Former chairman of the Export-Import Bank Fred Hochberg brings an unexpected sense of humor to this surprisingly engaging breakdown of international trade and its consequences for the US consumer.

If anyone should know and understand trade, Fred P. Hochberg – chairman and president of the Export-Import Bank of the United States from 2009 to 2017 – heads the list. In his engaging study, this true believer in trade sings the praises of the flow of international goods and explains the relevance of supply chains. Hochberg acknowledges the potential for economic pain with globalization, but he makes a compelling case that trade deficits simply don’t matter.

Industry leaders and finance-oriented news media admire Hochberg’s perceptions. Frederick W. Smith, FedEx founder and CEO – and thus a man whose profits, in large part, depend on trade – said, “Written by a uniquely qualified expert, this is a witty, enjoyable book that makes clear the great benefits – but difficult politics and policy choices – of international trade.” The Financial Times found Hochberg’s writing ”timely [and] engaging,” and The Wall Street Journal called his book “a sprightly and clear-eyed testimonial to the value of globalization.” Reviewers agree that Hochberg brings a humorous, illuminating and uniquely informal voice to trade discussions.