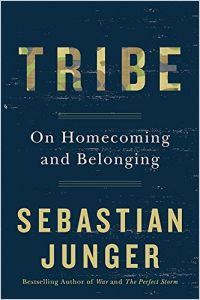 Sebastian Junger, the best-selling author of War, Fire, The Perfect Storm and Death in Belmont, co-directed the Academy Award–nominated Afghan War documentary Restrepo. Four years later, he directed Korengal, a documentary tracking the aftereffects of the war on the soldiers he profiled in Restrepo. Junger captured a curious ambivalence among the soldiers, an ambivalence more prevalent than most war reporting might lead you to believe exists. All the soldiers described their time at Restrepo – an isolated outpost high on a mountain overlooking the Korengal Valley – as the most harrowing months of their lives. They described the loss of their friends there as the most heartbreaking events of their lives. Yet many expressed a desire to return to those adrenaline-filled days of combat. In Tribe, Junger addresses this phenomenon as it has occurred throughout history and circumstance: People who live through life-threatening, high-stress situations yearn in some way to re-experience them. What Junger discovered, and what provides the theme of Tribe, is that while these people didn’t miss the horror of their experiences, they did miss the once-in-a-lifetime sense of community these events nourished. Trauma, Junger writes, fuels tribal bonds.

Tribe springs from an article Junger wrote for Vanity Fair magazine about returning veterans and their struggles with post-traumatic stress disorders (PTSD). He wrote the article, “How PTSD Became a Problem Far Beyond the Battlefield,” because of the deep bonds he developed with the soldiers he came to know and lived with while embedded as a journalist with the troops in the Korengal Valley. Junger shared their hardships and put his life at risk. When he saw what these soldiers experienced at home after combat, he wanted to raise awareness of their plight.

The events he lived through grant him unique credibility in discussing the soldiers’ hardships readjusting to civilian life. He doesn’t have to speculate about what they went through in the war; he was there.