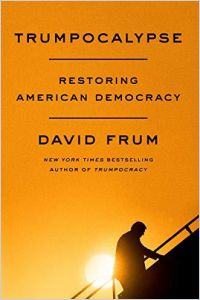 US President Donald Trump didn’t cause the coronavirus pandemic; but by ignoring experts’ warnings and exhibiting a lack of concern for anything other than himself, he made the situation far worse. Still, political commentator David Frum notes, many Americans continue to back Trump; and even if Trump loses the 2020 election, the systemic problems which helped put Trump in office – including weaknesses within the voting system and public sector, and polarization among the electorate – will remain. America can’t repair the damage Trump has caused, Frum argues, until they deal with these issues.

David Frum is a staff writer for The Atlantic. He was a speech writer for President George W. Bush and is the author of Trumpocracy: The Corruption of the American Republic.

The issues that made Donald Trump president won’t vanish if he loses the 2020 election.

Donald J. Trump may, or may not win the 2020 American presidential election. Although over the years of his presidency he has transgressed laws and shattered standards, the issues that brought him into power in the first place won’t vanish if he loses. Indeed, if he loses narrowly, that outcome may amplify the preexisting problems.

There are certain “flashpoints” in American politics and society that will remain important in the future. Over the past decade, cities, and the educated people living there, have enjoyed increased economic growth while other areas of the country have experienced dwindling prosperity. The division between rich urban centers and poor rural regions is more stark than ever when it comes to income, education, jobs and overall health. In 2016, Donald Trump was popular with the aging, baby boom generation – a cohort unlikely to have much interest in climate change and which tends to see immigration in negative terms. Even if Donald Trump loses the election in November 2020, neither Trump’s ardent supporters nor his political style will disappear...