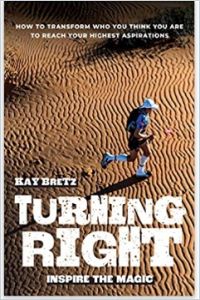 Long-distance running, which celebrates hardiness of spirit, offers many metaphors for life. As one of the world’s elite ultramarathon runners and an inspiring writer, Kay Bretz explains how to forsake the strictures of the status quo and reach for the stars. He offers a direct message to the human spirit for those who want to tap into their natural intuitive powers and innate capabilities. Bretz makes a persuasive argument for escaping overthinking. Trusting your intuition, he counsels, will lead to solutions that nourish your performance and growth.

Corporate leader, athlete and explorer Kay Bretz is an associate principal at McKinsey & Company. In 2020, Bretz established Turning Right, a consultancy that works with individuals and organizations.

A child with cancer taught Kay Bretz how to use a new mind-set to attack problems.

During part of his childhood, Kay – a German name pronounced “Kai,” which rhymes with sky – Bretz had a persistent bedwetting problem, a huge embarrassment for a preteen. The doctors told him the problem would go away in time, but it didn’t.Then, Bretz read about a little boy with apparently incurable cancer who had created his own fantasy world. In it, the boy was the captain of a tiny spaceship that patrolled through his body, blasting away the evil cancer cells. The boy persisted in his vision and eventually recovered.

Bretz admired the brave, imaginative boy and his mind-over-matter strategy. He assured himself that he could use a similar approach, but he knew he had to trust himself to make it work. Bretz understood that lapses might happen, but he decided to persist. With these hopeful, trusting thoughts, he went to bed affirming that he would wake up dry – and he did. After a time, he realized that he’d cured his problem. This gave Bretz an abiding faith in the power of positive thinking.

Realizing that he had the...