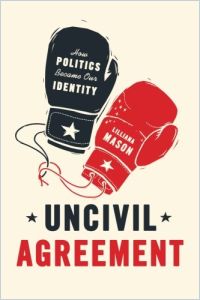 In an ideal representational democracy, voters assess policies and align themselves with whichever party best represents their interests. That allegiance can change if the party’s policy changes. But, according to social psychologist Lilliana Mason, policy is becoming less important in American politics than social identity and the desire to “win” – as evidenced by Donald Trump’s success in the 2016 presidential election. Mason argues that, today, Americans’ political identities are strongly tied to their social identities, such as race or religion; and political parties have made such identities core elements of their platforms. The more social connections a person has to their party, the more emotionally invested they are in its success. The resulting social polarization divides American society along partisan lines, heightens intolerance and imperils democracy. Mason explains that a healthy democracy depends on cooperation and compromise; it is dysfunctional when the parties choose victory at any cost over the common good. Extensively researched and refreshingly unbiased, with statistical data to support her findings, Mason predicts that social polarization will increase as long as the two-party system encourages blind party loyalty over policy.

Lilliana Mason is an assistant professor of government and politics at the University of Maryland, College Park. Her work has been featured in The New York Times, the Washington Post, and on NPR.

In 1954, social psychologist Muzafer Sherif conducted what is called the Robber’s Cave Experiment. Teams of boys were isolated from one another, and when made to compete, showed strong preference for their own team, and intense rancor toward the opposition. With time, their perceptions of the opposite team became more and more distorted, until violence broke out. The experiment proved that while group membership protects individuals, preference for the “ingroup” versus the “outgroup” leads to reactivity and distorts objective reality.

Since the Civil Rights movement, Americans have, increasingly, aligned with either the Republican or Democratic party based on social identities – such as race, religion and geographical location – rather than on policy. As a result, parties have become more homogenous, socially, and their members more engaged. Meanwhile, openness to cooperation and compromise with the other party have decreased. Group attachments that favor the ingroup are embedded in brain chemistry. People rationalize their biases based on their feelings rather than objective truth...