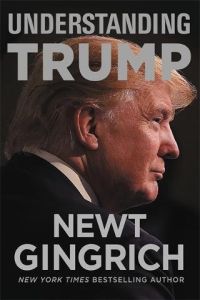 Newt Gingrich, former speaker of the US House of Representatives, explains why Donald Trump appeals to US voters and why he is an effective president. Americans like Trump, Gingrich argues, because Trump is a burger-and-fries guy like them. An openly biased reporter, Gingrich argues that the usual complaints about Trump aren’t really about the president himself. They concern the myopic worldviews of the left-wing media and the sclerotic Washington bureaucracy. Readers who don’t share Gingrich’s views may find it difficult to accept his account. Gingrich sees hope and unity in Trump’s speeches, which others view as dark and divisive. While always politically neutral, getAbstract finds that Gingrich offers a useful tour of the mind-set that brought Trump to the White House.

Donald Trump shocked the world when he won the 2016 US presidential election, but Trump’s victory came as no surprise to everyday Americans. Most Americans feel alienated from the Beltway elites who, along with their supporters in the media, academia and the Washington bureaucracy, control the US government. Trump ran as “a genuine outsider” who didn’t care about political correctness or party orthodoxy. He cared about the American people.

Trump was accused of rambling during his campaign events. But he grasped a crucial truth: He was running as a maverick. Slick, traditional messages would contradict his image as an outsider. Trump embraced this reality and spoke off the cuff. He knew no one cared if he overstated his wealth. While experts debated whether Trump was worth $9 billion or $2 billion, the masses heard only the word “billion” – and concluded that “they finally had a candidate who would not be bought.”

Trump gained expertise hosting The Apprentice reality show for more than 10 years. He appreciated realities of television that eluded others: Appearances and “overall impression” beat tradition and...