Portfolio, 2016
© 2016
From UNMISTAKABLE by Srinivas Rao. Summarized by arrangement with Portfolio, an imprint of Penguin Publishing Group, a division of Penguin Random House LLC.
ISBN: 9781101981702
Pages: 224 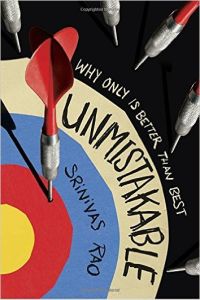 Learning to surf is no picnic. You’ll wipe out, you’ll get dragged across jagged rocks and other surfers will heckle you. But if you persevere, you’ll experience the joy of riding a wave. Srinivas Rao caught his first ride at age 30. The experience reshaped his outlook on life. In this inspirational work – part memoir, part how-to guide – Rao explains how surfing taught him to ditch his unhappy corporate career and pursue his dream of entrepreneurial content creation. Entrepreneurs and those who feel limited by their current career path will appreciate this autobiographical account of career change.

Srinivas Rao, host and founder of the Unmistakable Creative podcast, a compilation of interviews with hundreds of thought leaders, also wrote The Art of Being Unmistakable, a Wall Street Journal bestseller.

An “unmistakable” person or company is unique.

Srinivas Rao spent a decade following the rules of the business world. He earned a degree from the University of California at Berkeley, took a variety of jobs he didn’t like and earned an MBA at Pepperdine University. Rao finished graduate school as the bottom fell out of the old playbook for work success. He entered an economy very different from the one that had existed just a few years earlier.

In today’s world, basic competence is not enough. If you’re an interchangeable cog, the market will treat you as one, and will devalue your work. But an unmistakable individual or organization is one of a kind. An unmistakable person’s work is the opposite of a commodity – no one else could have made it. No MBA program, how-to guide or motivational speech can show you how to become unmistakable. It requires finding your unique voice.

Surfing gave Srinivas Rao the courage to carve his own path, and the tools to see failure and struggle as part of the journey of discovering his true vocation.

Rao, then 30, was wrapping up a study-abroad trip to Brazil when he decided to learn...

The Russian State and Russian Energy Companies, 1992–2018
8
Be Like Amazon
8
Cascades
8
Lifescale
8
Wherever You Go
7
Great American Outpost
9

Lessons from Sports
Starting a Business
Change Your Attitude