Ecco, 2018
UNTHINKABLE: An Extraordinary Journey Through the World's Strangest Brains. Copyright © 2018 by Helen Thomson. Published by arrangement with Ecco, an imprint of HarperCollins Publishers
ISBN: 9780062391162
Pages: 288 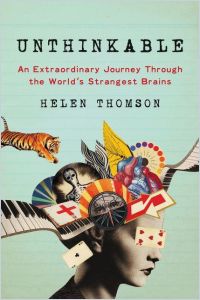 Meet a man who thinks he’s a tiger, a woman who gets lost going to the bathroom and a doctor who doesn’t merely empathize with his patients but feels exactly what they feel. Join science writer Helen Thomson for a journey through the inner workings of the human brain. She discusses the cases of nine patients, giving context to what otherwise might be faceless statistics in medical lore. Thomson’s tales of how these patients’ “unusual” brains affect their lives sheds light on the workings of the brain and on the capabilities most people take for granted. Thomson describes how different areas of the brain are involved in different aspects of consciousness and spends a worthy amount of space detailing how – despite a wealth of incredible scientific discoveries about brain function – the essence of human consciousness remains mysterious and unquantifiable. Her profiles will intrigue anyone fascinated by the twists and turns of human nature.

Helen Thomson is a consultant for New Scientist and writes for The New York Times, Nature and the BBC.

Much of what we know about brain function derives from studying cases of “unusual” brains.

Neuroscientists recognize 180 distinct regions of the brain that are involved in various functions such as speech recognition, memory, locomotion, and more. A variety of factors can cause a “mental anomaly,” including abnormal electrical or hormonal activity, structural damage, a cancerous growth or gene mutations. Sometimes these bring about disadvantages and sometimes advantages. In any case, the stories of Bob, Sharon, Rubén, Tommy, Sylvia, Matar, Louise, Graham and Joel illustrate what “unusual” brains are capable of.

Bob never forgets a moment of his life. He creates memories just like the average person, but his brain considers many more memories important enough to consolidate and retain.

People can improve their ability to remember. Alex Mullen practiced memory improvement techniques he learned from the book Moonwalking with Einstein. Within two years, Mullen won second place in 2015’s World Memory Championship. The technique he used is called a “mind palace.” To use...

Electric Brain
9
What the Distinctive Brains of Resilient People Can Teach Us
9
Can Lab-Grown Brains Become Conscious?
8
The Pain Relief Secret
7
Behave
8
The Leader’s Brain
7