Summary of Us vs. Them 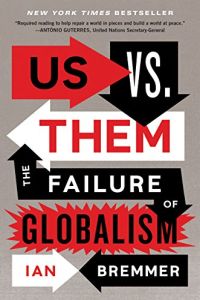 When people feel threatened, they try to find allies to help them fight the enemy, whether real or imagined. In this short, but intense book, political scientist Ian Bremmer explores how globalism’s ongoing economic, political and technological developments contribute to divisions between people. His text uses an ample supply of data to look at the similarities and differences in how “us vs. them” dynamics develop in various locales – including the United States, Europe and developing nations – and ways governments can either   exacerbate or help mitigate these issues.

Ian Bremmer is founder and president of Eurasia Group, a “global political risk” consulting and research firm. He writes a foreign affairs column for Time magazine, where he is editor at large.

Around the world, people’s belief that globalism – economic interdependence among all nations – will result in universal prosperity is on the wane. “Inequality” has become today’s watchword and rallying cry. Workers fear losing their income as the global economy shifts. Citizens are afraid to welcome immigrants to their countries and worried that governments aren’t doing enough to protect national borders.

Populist leaders from Bernie Sanders to Donald Trump understand why their supporters feel globalization and globalism are failing. They comfort their constituents who feel wronged or ignored by pledging to challenge those in power. In doing so, they draw lines between and define “us” and “them”: the deserving citizen, who is standing up for his rights, versus an entitled thief.

“Them” can mean different things in different places. It may represent the rich or the poor, ethnic, racial or religious minorities, competing political parties or different regions of the country. One thing is universally true, however: Insecurities about...

The Age of Walls
8
Global Inequality
9