Summary of War Is Not Over 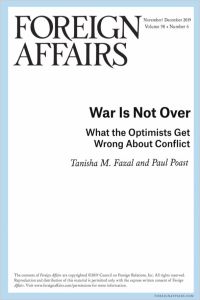 Is the world getting better or worse? Well, it depends on how you read the statistics. In this engaging article, political scientists Tanisha M. Fazal and Paul Poast challenge an increasingly influential claim in academic and political circles: that despite the daily deluge of negative news stories, a higher percentage of the world population is living in relative peace today than at any other point in history. The authors’ exploration of the flaws in this line of argument will intrigue optimists and pessimists alike.

Many contemporary academics and politicians claim that the world is becoming safer and more peaceful.

In The Better Angels of Our Nature, Harvard psychologist Steven Pinker uses large amounts of data and statistical analysis to conclude that instances of violence and war have declined, notably, in recent decades. US President Barack Obama made a similar claim in a 2016 speech at the United Nations, citing the end of the Cold War and the success of the European Union as evidence that the threat of another world war has all but vanished.

Pinker and Obama are correct that there have been no more continent-spanning wars since 1945. Statistical evidence also backs up their assertion that deaths in wars, civil wars, genocides and terrorism have decreased, both in absolute terms and as a percentage of the world population. Their rosy picture of the world is, nonetheless, based on an incomplete and skewed analysis of present statistics.

The sharp drop in war-related deaths does not mean the overall number of conflicts has diminished.

Progress in military medicine has played an outsized role in the sharp drop in...