Summary of War on the Middle Class 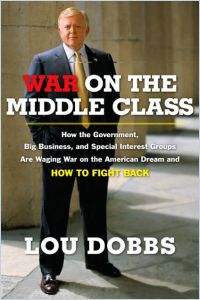 CNN anchor Lou Dobbs does not mince words in this provocative book about the political and business forces that are squeezing the U.S. middle class. He documents an array of government-sponsored abuses, including higher taxes, rising national debt, lost jobs and weaker representative government. Both Republicans and Democrats, he says, are guilty of elevating the needs of corporations over those of U.S. citizens. This is a disturbing message, and Dobbs deserves recognition for his dogged reporting, even though his viewers will recognize his usual rants and scapegoats, such as undocumented immigrants. getAbstract considers this important reading for anyone interested in learning about what Dobbs calls, "the greatest robbery in U.S. history." Politicians, lobbyists and corporate leaders may not be happy with what it has to say, but the book will explain why ordinary workers have such a hard time getting ahead.

Lou Dobbs is the anchor and managing editor of CNN's Lou Dobbs Tonight. He has received numerous awards, including the Peabody and the Emmy Lifetime Achievement Award.

Congress, the media and the major corporations have lost touch with the working people who built the United States. The country has recently exported more than 14 million jobs, and lobbyists and politicians serving the wealthy have undermined other middle class interests, such as improving educational resources, curbing illegal immigration, and building new manufacturing plants and infrastructure.

Instead of meeting these needs, the government increased the national debt, a burden that the middle class ends up carrying. Even as corporations outsource jobs and pay less in taxes than ever before, the middle class works longer hours at lower pay with reduced benefits. This situation has endangered the American dream. An elite group is using its new interpretation of free markets and democracy to subvert the U.S. political system.

The founders of the U.S. believed that government authority must arise out of "the consent of the governed." This consent does not exist today. The original signers of the Declaration of Independence were an economically diverse group: wealthy landowners and orphans, the college-educated and the self-taught. In contrast...