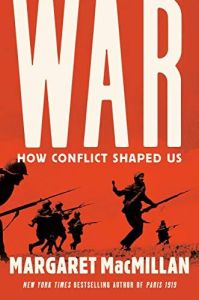 How Conflict Shaped Us

The review below was first published in the getAbstract Journal on Mar 29, 2022.
We’ve reviewed this title for you as we currently cannot offer a summary.

Prolific historian Margaret MacMillan provides a stark, harrowing assessment of war’s past and its inevitable future.

In this pessimistic, blunt exploration of humanity’s propensity for warfare and violence – A New York Times Book Review Ten Best Books of the Year – renowned historian and Oxford University Emeritus professor Margaret MacMillan demonstrates an astonishingly wide-ranging knowledge of conflict over the centuries. In the same paragraph, she might weave lessons from a Greek battle fought more than 2,000 years ago with observations from a 21st-century insurgency in the Middle East to produce groundbreaking insights into the psychology of war. MacMillan’s articulate – but nonlinear – approach may baffle some readers, but a compelling understanding of conflict and violence awaits those who follow her journey.

Humankind emerged about 350,000 years ago. The Earth had so few people, living so far from one another, that they had little opportunity for war. However, prehistoric skeletal remains suggest that people and tribes engaged in homicidal violence, which may have accounted for up to 25% of male deaths in primitive societies.