Summary of We Fed an Island

Ecco, 2019
WE FED AN ISLAND: The True Story of Rebuilding Puerto Rico, One Meal at a Time. Copyright © 2018 by José Andrés. Published by arrangement with Anthony Bourdain/Ecco, an imprint of HarperCollins Publishers
ISBN: 9780062864499
Pages: 288 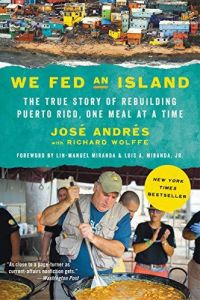 When famed restaurateur Chef José Andrés landed on hurricane-devastated Puerto Rico, he had no crisis management plan. He just knew he wanted to feed people. This riveting account covers his relief efforts as he formed Chefs for Puerto Rico. With thousands of volunteers, 24 kitchens, seven food trucks, donations and two FEMA contracts, they overcame many hurdles – like no electricity – to feed traumatized people. Andrés exposes the weaknesses of government’s relief. Telling his tale chronologically, he shows how a few people can make a big difference in a crisis, and demonstrates the healing benefits of making and eating good food.

Maria, a category five hurricane, spared nothing as it traveled west spreading devastation across the island. Renowned chef José Andrés had trained in Puerto Rico and owned a restaurant on Dorado Beach. Finding it difficult to get information about the damage after the storm, he decided to go see for himself.

He gathered supplies for the trip and contacted chef Jose Enrique Montes, who had a restaurant in Santurce, though Maria had wrecked it.

After the 2010 Haitian earthquake, Chef Andrés founded World Central Kitchen, a nonprofit that gives food to people after disasters.

World Central Kitchen is a familiar presence in disaster-hit communities, where it partners with local nonprofits to supply good food. In Haiti, it opened a restaurant and bakery at a children’s home, trained personnel and donated equipment. Food sales fund the home. It also opened a culinary school and helped improve kitchens in the island’s schools. World Central Kitchen helped women in the Dominican Republic build...