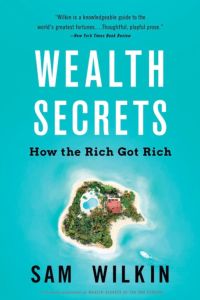 Economic analyst Sam Wilkin’s guide to wealth is a tongue-in-cheek analysis of robber barons and monopolists – those he calls the “filthy rich.” His original title for the book was Wealth Secrets of the One Percent, which better captures his subversive tone. Wilkin brings a welcome, breezy style to a topic that can be as dry as the legalese in an antitrust lawsuit. He doesn’t write like an economist, and that’s a compliment. getAbstract recommends this engaging study to managers, investors and students looking for a clear-eyed take on the world’s most successful businesspeople.

Sam Wilkin, a senior adviser to Oxford Economics and Oxford Analytica, holds an MA in international relations from the University of Chicago.

The Ravages of Rivalry

Competition is the single biggest obstacle to pursuing great wealth. Competition is good for consumers but not for aspiring oligarchs. Having a commercial rivalry drives prices down and puts upward pressure on costs. Consider Circuit City, the electronics merchant that started in the 1950s as a small retail operation in Richmond, Virginia. Sam Wurtzel ran the store, known as Wards, and sold televisions with a strategy of squeezing as much as possible from every customer. In the 1960s, Wards expanded outside Richmond and later went public. In 1968, as electronics sales boomed, its sales totaled $26 million.

Wurtzel expanded ambitiously, snapping up retailers across the country, but his profit margin in 1969 was a mere 1.8%. This left Wards vulnerable to economic downturns or pressure from new competitors. In 1972, Wurtzel named his son Alan Wurtzel as CEO. The company joined the National Appliance and Television Merchandisers, a trade group whose members followed a gentleman’s agreement of not encroaching on one another’s turf. By the 1980s, Wards had a new name – Circuit City – and a relatively respectable profit margin of 3.4%.