Summary of What Does It Mean to Be a “Karen”? Karen Explains. 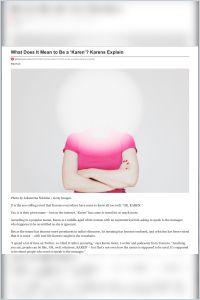 A meme communicates an idea quickly – sometimes a nuanced, complex idea – using an image or words or both. People use memes on social media as commentary. The original “Karen” meme depicts a middle-aged white woman who insists on speaking to a manager, but Karen has become shorthand for describing middle-aged white women who harass people of color. To confuse perception even more, sometimes people use Karen as an all-purpose slur. Journalist Elle Hunt, writing in The Guardian, talks to real-life Karens and unpacks the meme. As it turns out, not all Karens are “Karens.”

A “Karen,” according to a well-known internet meme, is a white, middle-aged woman with a sense of entitlement.

You can envision the Karen of the famous meme. She is white, with an asymmetrical short haircut and an air of peevish entitlement. Originally, the name referred to a woman in a shop who insists on speaking to the manager.

Writer Karen Geier first came across the meme on the social media site Twitter, where she saw it often. Now, she says, people often use “oh Karen” in a derogatory way for less-clear reasons. Some link the Karen meme to another meme from the movie Mean Girls, in which a character says, “Karen, you can’t just ask someone why they’re white.” Geier is quite liberal, so it irks her when someone...