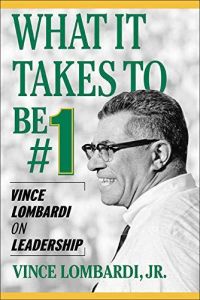 Vince Lombardi, a famous and widely quoted football coach, was an authoritarian with a gruff voice and legendary temper. He instilled an uncompromising work ethic in his players. In nine seasons as coach of the Green Bay Packers, he won five NFL championships and two Super Bowls. Though he died of cancer in 1970 at only 57, Lombardi left a legacy of leadership. A devout Catholic, he valued discipline, honesty, commitment and sacrifice. Vince Lombardi Jr. bases his profile on his dad’s famous “What It Takes to Be Number One” speech and often quotes the coach’s philosophy. The elder Lombardi was tough, but his players loved and respected him for showing them how to succeed, on and off the field. Lombardi’s son is justifiably proud of his father’s success. Some of the coach’s methods and mind-sets may bespeak a different era, but his leadership is clear throughout.

Decades have passed since Green Bay Packers coach Vince Lombardi delivered his “What It Takes to Be Number One” speech in 1970, yet his words still resonate. Lombardi articulated timeless, universal and relatable principles. He established his credibility by succeeding in the competitive world of professional football in the United States. Lombardi based his philosophy on nine foundational concepts:

“Commitment” – Anything short of 100% effort is unacceptable.

Commitment isn’t optional if you want to be a consistent winner. Dedicate yourself to doing things the right way. Commitment means obligating yourself to something specific, and eliminating other options or possibilities. Vince Lombardi required a 100% effort and wouldn’t tolerate excuses.

Lombardi himself admitted that commitment defied precise definition, but he recognized dedication when he saw it. When he first arrived in Green Bay, Lombardi estimated that only 50% of his players tried 100% “most of the time.” Lombardi told them that winning titles ...

Vince Lombardi Jr. is the former assistant executive director of the NFL management council, frequent public speaker and a labor negotiator. He is also the author of The Lombardi Rules and The Essential Vince Lombardi.