Summary of What Women Want 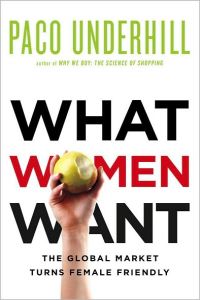 Frequent speaker and best-selling author Paco Underhill attempts to answer the vital question, “What do women want?” His purview is not women’s relationships – that’s another book altogether – but rather commerce and, via commerce, social change. He explains that women are reshaping the global marketplace, so businesses that don’t evolve to accommodate them will fall behind. Most of all, Underhill says, women seek “cleanliness, control, safety and considerateness.” A messy dressing room or a poorly lit parking garage may alienate these valuable customers. Through case studies, statistical research, interviews, anecdotes and his own firsthand observations, Underhill identifies how and why women spend money. getAbstract recommends this engaging, witty book to all marketing, advertising and retail professionals. Even those who do not agree with all of Underhill’s opinions and gender-based generalizations will find he presents interesting examples and arguments. Though he sometimes diverges from women-specific topics, even his detours prove fascinating.

Paco Underhill is founder and CEO of Envirosell, a research and consulting company. He wrote the bestsellers Why We Buy: The Science of Shopping and Call of the Mall: The Geography of Shopping. Underhill is also a columnist and speaker.

In 2005, in a historic first, women “under the age of 30” in the biggest U.S. cities surpassed men “in earning power.” Across the globe, women are faring better than men in employment trends. In Brazil and the U.S., for example, far more men than women are out of work. Even in higher education, women are “outpacing” men, achieving 140 bachelor degrees for every 100 that men attain. From 1969 to 2000, the number of female graduates increased 157%, but the number of male graduates increased only 39%. As a result of such advances, women are gaining prominence in the global marketplace as new “economic powerhouses.”

If you’re not considering how women perceive and affect your business, then you are doing your company a disservice. Simple details such as a messy dressing room or a creepy parking lot will alienate these important, influential consumers. To create a “female-friendly” environment, focus on these issues: