Summary of What You Should Know About Politics . . . But Don’t, Fourth Edition 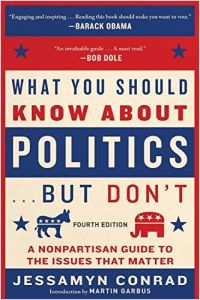 This breezy overview of American political issues presents itself as a nonpartisan cheat sheet for citizens who don’t pay much attention to politics. Consultant Jessamyn Conrad mostly delivers on that promise. For each topic, such as health care or trade, she describes a bit of its history and then delves into a discussion. The book leans heavily on debates and controversies from the George W. Bush era, however; the author does not mention Donald Trump’s trade wars, the sharp political divides of recent years and other current events. Still, this primer offers a solid grounding in a variety of hot topics.

Jessamyn Conrad is a senior consultant at Copperfield Advisory and holds degrees from Harvard, Columbia and Cambridge Universities.

The American economy is a top issue for voters – but it’s such a large and complex system that few understand how it works.

The federal government aims to create economic circumstances that are just right: growth, but not so much growth that the machinery overheats. During the 2008 financial crisis, housing values inflated into a bubble. The mortgage meltdown and Great Recession led to increased political scrutiny of the two quasi-public mortgage giants, Fannie Mae and Freddie Mac. Government bailouts sparked a backlash in the form of the Occupy Wall Street movement, which criticized how Wall Street and Washington, DC, elites ran the economy.

Political discussions of the economy often veer into tax policy, a source of wide disagreement. Republicans generally dislike income taxes, considering them punitive because the rich pay more in taxes than the poor do. Liberals counter that the wealthy pay less in taxes as a share of their overall income than middle-income taxpayers do. Democrats also argue that taxes are necessary to pay for social programs, safety nets and public infrastructure. Underlying the tax debate is a...