Summary of When She Makes More 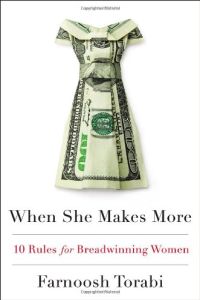 Financial expert Farnoosh Torabi discusses alarming statistics about financially nontraditional relationships and marriages. High-earning women are more likely to stay single. Once married, couples with female breadwinners suffer higher rates of infidelity on both sides, and are more likely to divorce and to be under great stress from child care or housework. Despite the statistics, these couples can thrive if they develop sound communication and sensitivity. Torabi lists 10 rules breadwinning women and the men who love them should follow to nurture their relationship. Despite the occasional pitfall of gender stereotypes, getAbstract recommends her useful fresh examination to couples who struggle with their roles because the woman makes more money.

Farnoosh Torabi is a contributing editor at Money Magazine. Her work has appeared in The New York Times, Time and Entrepreneur. She appears regularly on The NBC Today Show and hosts the top-rated daily podcast So Money on iTunes.

10 Rules for Couples with a Woman Who Makes More Money

Women who earn more money than their partners or husbands face several relationship challenges. Traditional gender roles affect marriage, divorce and even the number of hours people work. Couples in which the women earned more were less likely to marry, less likely to be happy and more likely to cheat. Such couples may find a better balance if they heed these 10 rules:

A woman who outearns her male partner is more likely to remain single or to have a rocky marriage, “to feel pressured to work less and to get divorced.” Such marriages are also more at risk of “infidelity on both sides.” Men who depend on their female partners’ salaries are five times more likely to cheat than men who earn equivalent salaries. These issues are pervasive, because “women under the age of 30 have a higher median income than men in nearly every major city” in the United States.

Consider two different breadwinning women, Carmen and Michelle. They “look at their husbands and think the exact same thing: What do I need you for?” Carmen was already thinking about divorce; Michelle was not. Relationship expert...

The Unmade Bed
8
Girl, Wash Your Face
8
No Visible Bruises
9
Microtrends Squared
8
The Road to Somewhere
8
The Book of Gutsy Women
9