Summary of When the Center Held 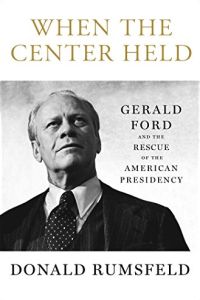 In the wake of President Richard Nixon’s resignation, the United States needed someone to unite and help heal the country. Gerald R. Ford was that leader. Donald Rumsfeld draws on notes and memoranda from his time in the administration as chairman of the presidential transition team, White House chief of staff and secretary of defense to relay how Jerry Ford brought balance to the country. Rumsfeld, an engaging writer, describes the challenges, context and successes of Ford’s 1974-1977 presidency while detailing his own role. Rumsfeld’s commentary can seem like Monday-morning quarterbacking, but overall, his approach proves insightful and well-informed. Short chapters make for a well-paced read. This book is a tribute, because this Ford has few warts. But it will be of note to those who enjoy inside looks at presidencies, to anyone interested in the Republican Party’s evolving identity, and to those seeking inspiration about surviving today’s highly charged political climate.

Former congressman Donald Rumsfeld was twice US secretary of defense, US ambassador to NATO, envoy to the Middle East and White House chief of staff.

Gerald R. Ford was in public service his whole life.

Gerald R. Ford reported for duty daily in the course of his long, varied public service career. He served in the US Navy on the USS Morrissey, an aircraft carrier, in World War II. He spent more than 20 years representing Michigan in the House of Representatives. When Ford stepped into the role of vice president following the 1973 resignation of Spiro Agnew – the result of allegations of bribery and kickbacks during his time as Maryland’s governor – Ford had never held an executive position.

On August 9, 1974, after Ford spent eight months as vice president, President Richard M. Nixon resigned in the wake of the Watergate scandal. Ford became the 38th president of the United States. He’d never been on a national ballot as a vice presidential or presidential nominee. Now he had the duty of leading America as it teetered on the cusp of political and civil troubles. His 895 days in office became a time when the center held.

Ford played center on the University of Michigan’s varsity football team from 1932 to 1934. The center is the...

Kissinger the Negotiator
8
His Very Best
9
The Relationship Economy
7
Leadership Is Language
9
Connection Culture, Second Edition
9
Our Time Has Come
8