Summary of When the Money Runs Out 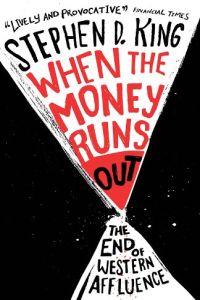 In this “mixture of economics, politics and history,” economist Stephen D. King inches toward the conservative side with his attitudes and analysis of government debt and stimulus. King shares a concern with other observers that the financial crisis, quantitative easing and contemporary economic circumstances are leading to “schisms” in society. He answers the call for a 1930s-like stimulus by noting that governments have already shot more stimulus bolts than President Franklin Roosevelt, who faced a different situation, ever did. King encompasses a wide range of references – economic history, Japan and Argentina, economist Ludwig von Mises’s “illusory prosperity” concept, the late-1990s Asian crisis, and the contrasting fortunes of different generations – in order to ask a telling question: What are the consequences when foreigners come to feel less confident in Western finances and want more hard assets in debt repayment? King’s most exciting argument is in favor of nominal GDP targeting, perhaps the next big policy idea in coming years. getAbstract recommends his rich exegesis as an intelligent, concerned contribution to the financial debate.

Economists and society in general suffer a collective delusion about the recurring bubbles in Western economies and in particular about the pre-2008 American property boom. This attitude exemplifies the hubris that “too often comes before nemesis.” Even Janet Yellen, now the much-respected chair of the US Federal Reserve, failed in the early 2000s to gauge the seriousness of the subprime crisis. She stated then that the bursting bubble would not have a large effect on the economy. As economist Ludwig von Mises argued decades ago, a dramatic credit expansion can cause only illusory prosperity.

This theme highlights significant similarities between the recent financial crisis and the Great Depression: In both periods, analysts accused the Feds of keeping interest rates too low in the years before the crisis, which encouraged a binge on easy credit, resulting in the inevitable hangover. In its pre-2008-crisis statistics, the government exercised particular hubris when it recorded risky activity in GDP figures favorably, thus tacitly approving subprime risk.