Summary of Where Did You Get This Number? 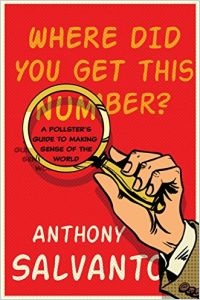 How do polls predict political races? Anthony Salvanto, the political scientist who announces the projected winners on election nights at CBS News offers an insider’s take what the numbers reveal about Americans’ views on politicians and hot-button issues. Salvanto discusses the controversial 2016 US presidential election, voter turnout, increasing partisanship and economic disparity, and Americans’ thoughts on health care and immigration. Though a book focused on statistics might sound dull, Salvanto leverages fun metaphors to illustrate the way polling works and how it applies to politics.

Anthony Salvanto serves as Director of Elections and Surveys at CBS News. He is in charge of national and state polling and controls the Decision Desk, which projects outcomes on Election Nights.

How can polling data from a few individuals predict a bigger whole? Taking a poll is like taking a sample scoop of spaghetti sauce. When Anthony Salvanto’s grandmother made her famous Bolognese sauce she often asked family members to taste it. Nobody ever asked for a whole bowl because a spoonful of sauce was enough to tell her if they liked it or not. Likewise, a poll is a representative sample of the whole country; whether you survey 1,000 people or 100,000 people, the outcome is the same.

Surveying 1,000 people is standard. In a poll of 1,000, there’s a margin of error of plus or minus three points. But upping the number to 3,000 leads to a two-point margin of error. With the latter situation, you’ve spent more time, money and effort only to deliver the same results. With elections, when two candidates are polling close together, you need for the gap between them to be twice as big as the margin of error in order to determine the outcome of the race. If they’re only one or two percentage points apart, it’s safer to call the race a tie until you have more information.

Does mail-in voting lead to fraud – and does it help Democrats? The facts
8
What You Need to Know About Voting – and Why
8
Breaking the Two-Party Doom Loop
8
Uncivil Agreement
8
Ill Winds
8
The Billion-Dollar Disinformation Campaign to Reelect the President
9

Society
Domestic Politics of the USA