Summary of Where the Water Goes

Riverhead, 2017
© 2017
From WHERE THE WATER GOES by David Owen. Summarized by arrangement with Riverhead Books, an imprint of Penguin Publishing Group, a division of Penguin Random House LLC.
ISBN: 9781594633775
Pages: 288 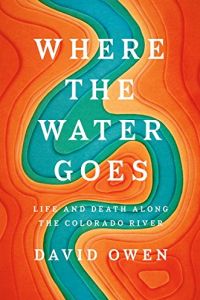 New Yorker staff writer David Owen’s treatise on water use in the Western United States reflects the treatment of fresh water sources all over the developed world. Owen puts a human face on competing water interests, revealing the nuanced complexity that so often surrounds resource allocation. He doesn’t identify good or bad guys – just thirsty people, thirsty crops and a lot of dead fish. getAbstract recommends Owen’s startling history of the Colorado River to policy makers, environmentalists, and all those who washed their face or brushed their teeth this morning.

New Yorker staff writer David Owen also wrote Green Metropolis: What the City Can Teach the Country About True Sustainability and The Conundrum: How Scientific Innovation, Increased Efficiency, and Good Intentions Can Make Our Energy and Climate Problems Worse.

Ranchers and farmers in the mid-1800s pushed westward in part because they believed that “rain follows the plow.” A related claim suggested that trains and telegraph lines prompted rainstorms. Settlers who believed such claims were sorely disappointed when the arid West couldn’t support their farms. However, if you disregard the lack of water, deserts are ideal for agriculture. Farmers need not fear frost, hail and violent storms. Consistent weather permits stable farm employment and precise planting and harvest dates. Before man-made dams tamed the Colorado River in the 1930s, its course shifted around Southern California and Southwestern Arizona, depositing silt and flattening the land for farming.

The Paradox of Irrigation Efficiency
8
Adapt Now: A Global Call for Leadership on Climate Resilience
8
WMO Statement on the State of the Global Climate in 2019
9
Disaster by Choice
8
Forests Emerge as a Major Overlooked Climate Factor
8
Explainer: Nine ‘Tipping Points’ that Could Be Triggered by Climate Change
8