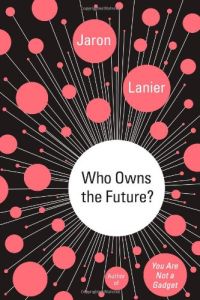 Who Owns the Future?

Author Jaron Lanier touches on self-driving cars, financial algorithms, climate change, a fair economic system and dozens of other complex topics. The overarching theme that unites these disparate ideas is how information technology is transforming each of them, though people generally underestimate how fundamentally this transformation will disrupt the economy. Lanier helped pioneer virtual reality and has been involved in or been a close observer of many digital advances. His observations possess particular weight and vividness. Lanier points out how information technology has made society less fair and less humane. This is not an easy read, due to its idiosyncratic organization, its vast ambitions and Lanier’s iconoclastic approach. The author’s prescription for a new, more equitable, more functional economy is fascinating but sometimes hard to parse. Still, getAbstract recommends this manifesto as required reading for anyone intrigued by cyberculture, ethics or shaping the future – if you can read with patience.

From laptops to the computer chips in cars, information technology is everywhere. As the full picture of information technology’s impact unfolds, most people will find that they vastly underestimated the scale and scope of that transformation. The concept that information is “free” is almost a cliché; later in the 21st century, that view will seem “narrow and shortsighted.” Information seems free now because it has not spread far enough to disrupt most areas of the economy.

When software becomes integrated with the full spread of the economy, including transportation, manufacturing, education and health care, another “industrial revolution” will take place. As in earlier industrial revolutions, this one will transform society and create new economic challenges. Will people experience utopia, in which machines create infinite wealth for humans? Or will society enter “a period of hyper-unemployment,” as machines replace people in current high-paying jobs?

People give away value and erode the middle class without realizing it. For example, the workers who create value via computer networking don’t benefit from it – instead...

A pioneer of the virtual world, computer scientist and musician Jaron Lanier also wrote You Are Not a Gadget.

You Are Not a Gadget
7