Summary of Who Rules the Earth? 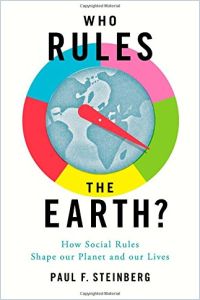 Sustainability professor Paul F. Steinberg studies social rules and civic governance in terms of how they affect the environment. He alerts readers to something vitally important hiding in plain sight: Nations, regions, local administrations and society itself create and change the formal and informal rules that protect or exploit the Earth. These rules and regulations affect natural resources, deforestation, polluting emissions, pesticides, recycling, water rights, and much more. Such rules don’t appear spontaneously. Organizations, people and coalitions debate and fight for them fiercely. Many rules seem perverse and most citizens believe they can’t do anything to change them. But they can. Rules are mutable and, Steinberg says, people must work to change them in order to save the planet. getAbstract recommends Steinberg’s overview to executives, futurists, concerned citizens, and current or potential activists frustrated with the pace of change.

Organized society would collapse quickly without rules. If you doubt it, try living in a country that has few rules or that enforces them randomly and arbitrarily. Rules operate for good or bad, but you have the power to change them.

Nations, regions and towns create and change rules to protect natural resources, and to prevent pollution and destruction. Such rules don’t appear spontaneously. Organizations, people and coalitions fight for them. Corporations hire lawyers and lobbyists and contribute to political campaigns. People and coalitions protest, write letters and meet with lawmakers. Yet only a few citizens participate in collective activism. Instead, most people take isolated, individual action; they recycle, ride a bike to work or install solar panels. Working in harmony, they make a difference. However, sustainability won’t come from individual actions, but from changing social rules so everyone’s behavior changes. People must act big, act together and move fast.

Country doctor June Irwin lives in the Canadian town of Hudson near Montreal, Québec. In 1985, she became convinced that pesticides harmed her patients...