Summary of Why Do We Think That Inflation Expectations Matter for Inflation? (And Should We?) 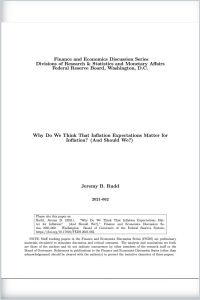 Supply-chain bottlenecks, energy shortages and surging demand in a post-COVID-19 world have ignited inflation fears. But the assumption “that expected inflation is a key determinant of actual inflation” is getting pushback from Federal Reserve economist Jeremy B. Rudd. In this contrarian analysis, he examines the basis of the inflation-expectation hypothesis and its efficacy in predicting price dynamics. Economists, policy experts and executives will find a timely and insightful look at inflation mechanics in this cutting-edge report.

Jeremy B. Rudd is a senior advisor for the Board of Governors of the Federal Reserve.

A staple of monetary theory says that expected inflation is a major factor in actual inflation, but little evidence supports the notion.

Central bankers rely on the inflation-expectation hypothesis, which says that “expected inflation is a key determinant of actual inflation.” The proposition is intuitive, and it is convenient in explaining variations in other models, such as the Phillips curve, which describes the inverse correlation between unemployment and inflation rates.

But this theory lacks proof. Researchers have made only a few attempts to test the inflation-expectation hypothesis directly, and the evidence...

Raising the Inflation Target
8
3 Inflation Scenarios: How Bad Could It Get?
8
The Great Demographic Reversal
8
Between Debt and the Devil
9
The Age of Magic Money
8
What is Yield Curve Control?
8 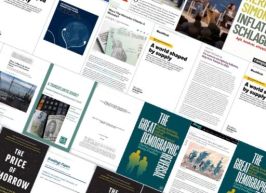