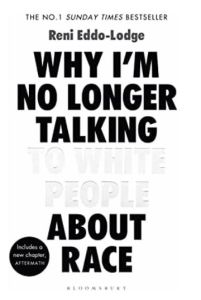 Why I’m No Longer Talking to White People About Race

The review below was first published in the getAbstract Journal on Oct 1, 2020.
We’ve reviewed this title for you as we currently cannot offer a summary.

A Primer on British Racism

In 2014, British journalist Reni Eddo-Lodge stopped having conversations with white people about race: They weren’t listening. For those who are listening now, her book offers an essential education on Black history in Britain, structural racism, and what white people can – and should – do about it.

White people, on the whole, resist the topic of racism – and seeing their own complicity in it. Black observers were pointing to the phenomenon long before Robin DiAngelo coined the term “white fragility.” For Reni Eddo-Lodge, white people’s habit of shutting down, interrupting and denying during conversations about race led her, in 2014, to stop having them. In a viral blog post, she asked what purpose there could be in talking with people who weren’t listening.

The Risks of Talking About Race

Book
So You Want to Talk About Race
10
Book