Review of Why Nations Fail 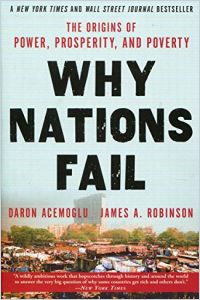 Whether you’re from a wealthy nation, an impoverished one or somewhere in between, you’ve probably asked yourself why your country inhabits its place in the international hierarchy. Culture? Natural resources? Luck? When the Spaniards came to the new world, they sought gold and other riches, but they didn’t plan on mining the precious metals themselves. The trick, they found in places like Peru and Mexico, was to capture the king, take his wealth and then torment him until he begged his people to give in to the Spaniards’ demands. Eventually, the people were organized into a system of forced labor that extracted then transported local resources back to Europe, enriching the Europeans and impoverishing native American peoples. European settlers weren’t able to do this in all regions in the Americas, however. In Jamestown, when it became clear the indigenous people wouldn’t provide the slave labor needed to make the colony economically successful, the Virginia Company was forced to incentivize labor among its colonists, offering them land and a vote in the General Assembly. A semi-democratic system emerged, which eventually led to the inclusive political and economic systems that define the United States today.

It is these pluralistic institutions, economists Daron Acemoğlu and James A. Robinson argue, which are most responsible for world inequality and the economic success and failure of nations.

The quality, culture or ancestry of a nation’s people have little influence on its wealth.

Acemoğlu and Robinson begin their text with an illustrative example: On the north side of the city of Nogales, they write, residents are educated, most have health care, their property rights are respected, and they enjoy the benefits of law and order. The average income is about $30,000 a year. Residents of the south side of Nogales, on the other hand, make about a third of the annual income of their northern neighbors. Most haven’t graduated from high school and have limited access to health care. Authorities are corrupt, bribes are required to open a business and residents know the gains they acquire through hard work will likely be expropriated.

Despite their economic disparity, the residents of north and south Nogales aren’t terribly different. They share a common culture, common ancestors and, for the most part, a common history. So, Acemoğlu and Robinson ask, why the disparity? The answer is simple: Nogales straddles the border between Mexico and the United States of America, and stark differences exist in the institutions that govern each side of the border. These institutions, Acemoğlu and Robinson argue, are responsible for the inequality that persists between the two communities.

Global Risks 2035 Update: Decline or New Renaissance?
8
The Ukrainian Night
8
The Weird, Extremely German Origins of the Wirecard Scandal
7
How Liberalism Became ‘The God That Failed’ in Eastern Europe
5
The New German Question
8
The United States Should Fear a Faltering China
8