Summary of Why Wall Street Matters 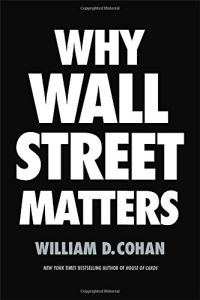 This short, easy-to-read book argues for a simple concept: Improving the incentives of those who work on Wall Street will be more effective in preventing financial crises than tightening regulations. Drawing on history to make his case, business journalist William D. Cohan urges readers to appreciate Wall Street – which he acknowledges is not so easy to do after the 2008 debacle – and its valuable role in allocating capital. Cohan could have gone into more detail about how Wall Street firms fund businesses that improve the lives of ordinary people. Nonetheless, astute readers will find his central points intriguing and perhaps useful in countering the growing anti-capitalist narratives of the discontented. The question is, of course, whether Cohan is right or wrong: Do financial innovations have the merit he sees in them or could they be the road to risk and ruin?

William D. Cohan, formerly a Wall Street banker, is a financial journalist and the author of the bestselling books Money and Power, House of Cards and The Last Tycoons.

When the phrase “Wall Street” comes up in the media or public conversations, most of the time the context is derogatory. It has become easy shorthand for the greed, flaws and inequality of the capitalist system. This is not a new phenomenon, but the 2008 financial crisis and its subsequent bank bailouts ramped up the anger. As a presidential candidate in 2016, Donald J. Trump attacked Wall Street, and Senator Bernie Sanders gained surprisingly large support for his Wall-Street bashing rhetoric.

Americans’ resentment and demonization of Wall Street, which most people don’t really understand and can’t really define, threatens to damage the functioning of the economy itself. Few of those who stereotype Wall Street activity appreciate what the financial sector actually does or how it contributes to the real economy. Modern finance’s opacity and complexity feed the misunderstanding. While critics argue against government rescues of financial institutions, they miss the fact that the rescued banks paid back the taxpayers’ billions at a profit to public coffers.

Bankers who make money off people in good...