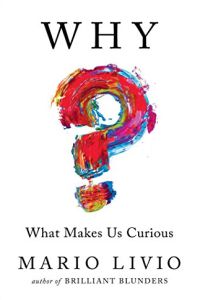 Renowned astrophysicist and science ambassador Mario Livio considers how nature’s spectacles inspire awe. In wondering what causes that sensation, he provides the fascinating background of two exemplars of insatiable curiosity – Leonardo da Vinci and Richard Feynman. Livio also details leading “theories of curiosity” emerging from today’s research in psychology and brain imaging. Evolutionary theories about curiosity and a discussion of its immense power to overcome oppression round off Livio’s earnest, engaging explorations. Keen “infovores” – those with an appetite for knowledge – will relish his insights.

Mario Livio is an astrophysicist, popular speaker and the author of six popular science books, including The Golden Ratio, Brilliant Blunders, and Is God a Mathematician? He promotes scientific literacy through his books, social media, interviews, and through public speaking. He has also collaborated in creating classical music compositions inspired by Hubble images.

Investigating curiosity means delving into psychology, neuroscience and a diversity of other disciplines. As neuroscientist Joseph LeDoux and his team demonstrated, being surprised calls the brain into action. The sympathetic nervous system boosts the heart rate, causing sweating and other symptoms. In the brain, a “fast track” from thalamus to amygdala mediates the emotional reaction to a situation, whereas a “slow track” via the cerebral cortex mediates conscious evaluation. Psychologist Daniel Berlyne found that curiosity runs along two axes. One goes from “perceptual” – in response to novel, surprising stimuli – to “epistemic,” in search of knowledge. The other goes from “specific” – seeking a particular answer – to “diversive,” avoiding boredom. Epistemic curiosity drives quests in science, philosophy and other areas.

The Poetry and Music of Science
9
The Intelligence Trap
9

The Controversial Correlates of Consciousness
9
This Idea Is Brilliant
10