Summary of Will Your Next Mistake Be Fatal? 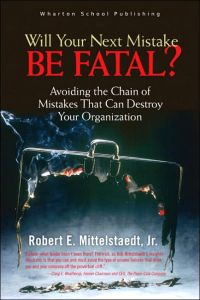 Robert Mittelstaedt has written a rare, commendable book. He manages to address a significant business topic - the phenomenon of major corporate blunders - in an original, insightful and entertaining way. In this intriguing volume, he cites case after fascinating case where a series of seemingly small errors went uncorrected until a whole house of cards marked "faulty assumptions" came crashing down. The biggest mistake you can make is assuming that a fatal blunder just couldn’t happen in your organization, and the second biggest is ignoring the warning signs that disaster is just ahead. The key, Mittelstaedt advises, is to learn to admit that something has gone wrong before the situation spirals out of control. getAbstract.com encourages every thoughtful business professional to read this substantive contribution to the field of risk management and disaster prevention.

Robert E. Mittelstaedt, Jr. is dean and professor of the W. P. Carey School of Business at Arizona State University and a corporate consultant. His consulting clients have included the U.S. Nuclear Regulatory Commission. He formerly directed the Wharton Innovation Center and served as an officer in the U.S. Navy nuclear submarine corps.

A Cascade of Errors

On December 29, 1972, Eastern Airlines flight 401 from New York to Miami had a relatively minor problem. As it prepared for landing, its "gear down and locked" light would not illuminate. Was that due to a mechanical problem or was it just a faulty indicator? While flying at 2,000 feet over the Florida Everglades, the captain asked ground control to allow him to investigate further before landing.

Two members of the crew entered the aircraft’s electronics bay to check on a manual gear indicator, and the captain ordered that the autopilot be engaged. Shortly afterward, unbeknownst to the crew, the aircraft began to descend; the autopilot function that would normally hold the plane’s altitude either was not engaged or failed to work.

The controller saw that the flight had an altitude of only 900 feet. When he called for an update, the crew confirmed that the landing gear was down, and asked permission to return to the airport for landing. Then the crew and the air traffic controller made a fatal error. Agreeing to the request, the controller said, "Eastern 401, turn left heading one eight zero." The pilot put the aircraft into a 28-degree left...

What Did We Know? What Did We Do?
8
Meltdown
9
Political Risk
10
Midnight in Chernobyl
9
Endurance
9
The Fearless Organization
8