Summary of Win at All Costs

Dey Street, 2020
WIN AT ALL COSTS: Inside Nike Running and Its Culture of Deception. Copyright © 2020 by Matthew Hart. Published by arrangement with Dey Street Books, an imprint of HarperCollins Publishers.
ISBN: 9780062917775
Pages: 432 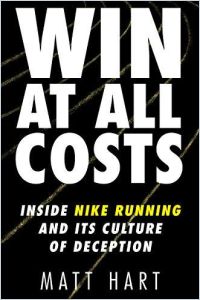 The 2012 Olympics crowned running coach Alberto Salazar’s triumphant second act. A legendary distance runner in the 1980s, but lacking Olympic medals, he’d fallen apart physically. Now, athletes he coached won medals in the 10,000 meters, including second placer Galen Rupp, who’d been under Salazar’s wing since high school. But, reveals journalist Matt Hart, sinister deeds lay behind Salazar’s feel-good story. He constantly flirted with – and often crossed – ethical lines. He all but ordered Rupp and other runners to take drugs for imaginary ills. Salazar was ultimately sanctioned for doping. As it often does, athletic competition once again offers an object lesson about the means to an end.

Matt Hart covers sports science and performance-enhancing drugs. His work has appeared in The New York Times, National Geographic Adventure and Outside.

Alberto Salazar once was the brightest star among US distance runners.

Born in Cuba and raised in the United States, Alberto Salazar starred as a runner for the University of Oregon and burst onto the national scene. At one memorable race in 1978, he ran so hard in the heat that his body temperature spiked to 108 degrees. He won the Boston Marathon in 1982, when American runners dominated distance events.

At the 1981 New York City marathon, he set a world record of two hours, eight minutes and 13 seconds. Nike paid him a salary of $250,000, a huge sum in the early 1980s. Salazar embraced dimethyl sulfoxide (DMSO), which trainers used as an anti-inflammatory treatment for horses.

Salazar won the New York City Marathon three years in a row, but fought chronic fatigue and illness. He failed to make the 1984 Olympic team. To revive his career, Salazar tried Prozac, an antidepressant, and prednisone, a corticosteroid allowed in certain instances. He took testosterone, which was a banned substance. In 1994, Salazar won a grueling 55-mile race in South Africa. He later admitted to using testosterone from 1995 to 2006.